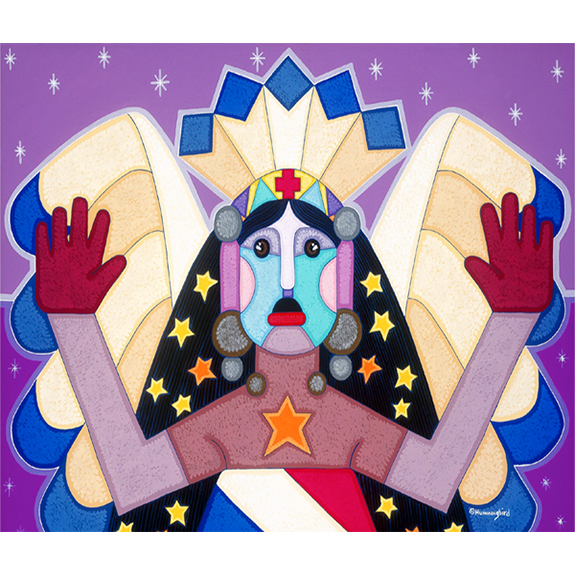 Jesse paints one new Angel each year. This one was done after the tragedies of the fall of 2001 and although he didn't plan it, the symbols in this show the influence...the red cross on her crown, the pointed crown itself, and the stars throughout the piece. 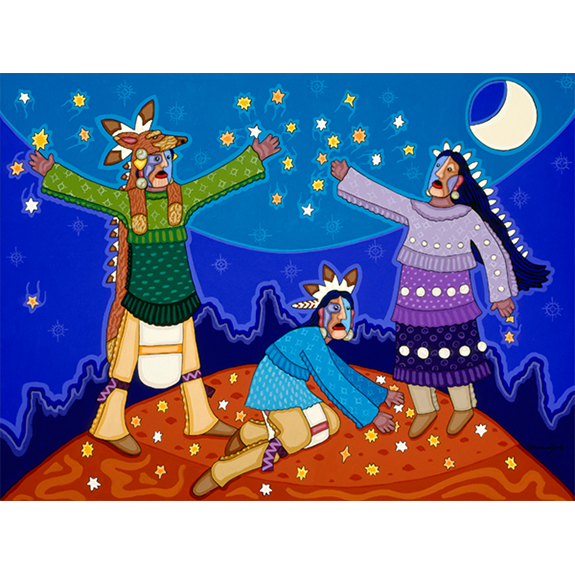 This is loosely based on a Navajo story of a long time ago when there were no stars in the sky at night. The nights were very dark and all the animals would bump into each other. When asked, the Great Spirit said to go collect up piles of shiny stones and carry them into the sky and make pictures of the animals there. When they became tired, He told them to ask coyote for help. Coyote planned an elaborate picture of himself but when he ran out of time, he just ﬂung the remaining stones up in the air. That’s why some constellations appear ﬁnished and others not. Coyote forgot to save stones for his own picture and that’s why the coyote howls at night. 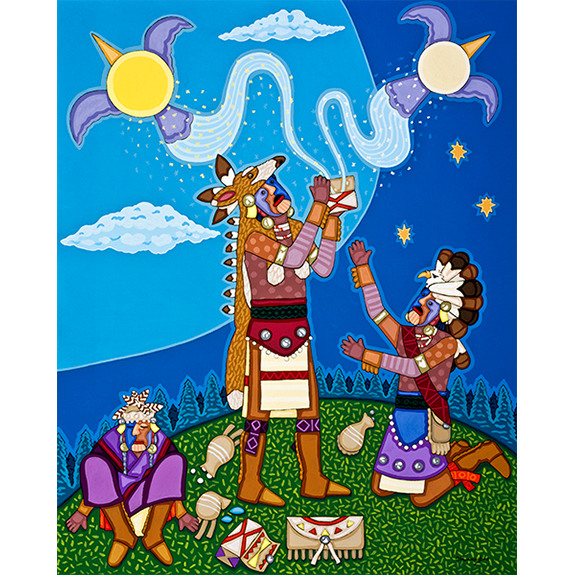 This is based on a Zuni legend. Back when it was always dark, it was also always summer. Coyote and Eagle went hunting. Coyote was a poor hunter because of the dark. They came upon an old man who said he had the Sun and the Moon in his box. After the old man had gone to sleep the two animals stole the box. At first Eagle carried the box but Coyote convinced his friend to let him carry it. The curious Coyote opened the box and the Sun and Moon escaped and flew up to the sky. This gave light to the land but it also took away much of the heat, thus we now have winter. 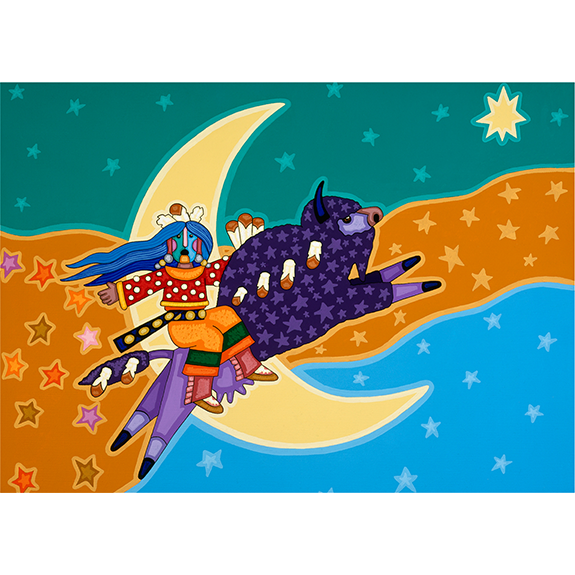 Originally Buffalo Girl was a derogatory term. So Jesse developed a series of Buffalo Girl pieces that made them strong and powerful and good. They ride buffalo of a shade of blue and are performing great feats. Here she is jumping the moon in her ride across the sky. 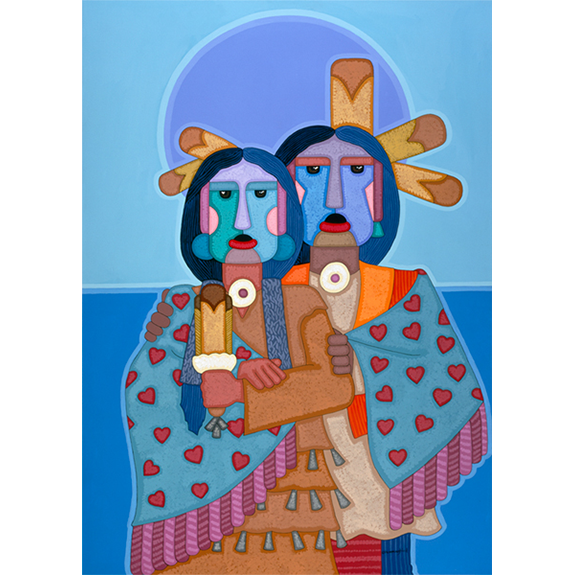 Traditionally at pow-wows, shawl dances are very energetic dances done by young women. Each has her own special shawl for this. Here is Jesse has taken a little play on that and shows a couple in love wrapped in a single shawl indicating their affection for each other.With the naked eye in most places, only six of the seven stars in the Pleiades can be seen. The top of Devil’s Tower is the only place where all seven stars can be seen all the time. To show this Jesse has six of the seven sisters holding on to the seventh smaller, weaker one that forms the constellation. 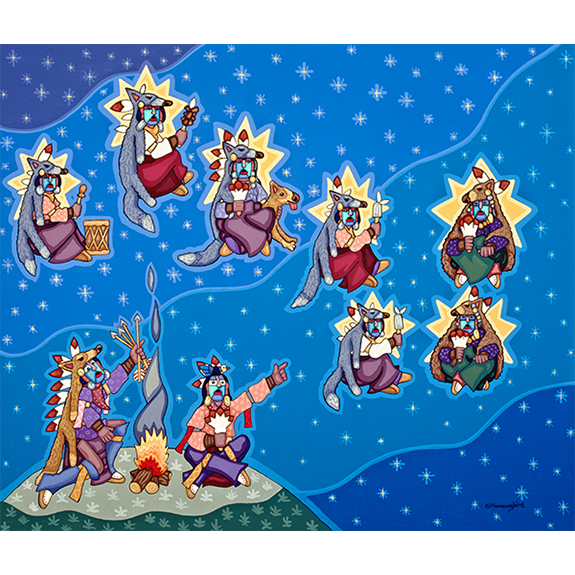 Coyote Story of the Big Dipper

Coyote told Meadowlark to tell everyone of how he placed the Big Dipper and all the other stars. One time coyote found five wolves (who were to share their hunting with him) looking up in the sky. They told him they saw two animals up where they could not get to them. Coyote said he would help them get to the animals. He shot an arrow into the sky; then he shot many more arrows, each one sticking into the one before to form a ladder. When the wolves climbed the ladder they found two bears sitting there. Coyote warned them not to go near because the bears would tear them apart. But the wolves sat down near the bears and looked at them. The bears just looked back. Coyote thought they looked good sitting that way, so he left them there for all to see they way we see them today—the Big Dipper. Coyote went on to arrange stars in pictures all over the sky 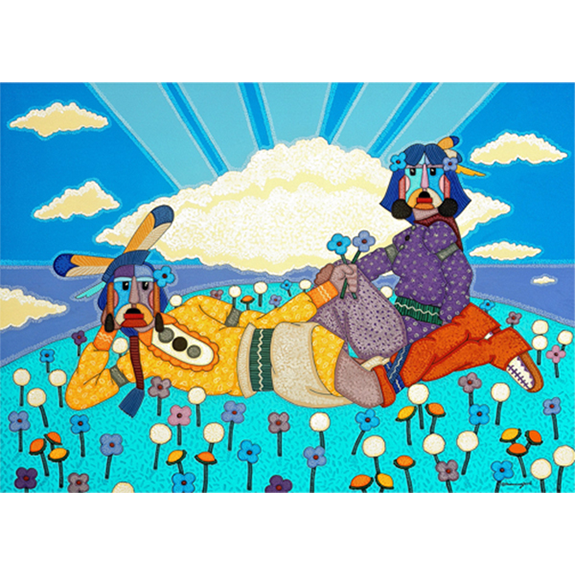 A young couple enjoying the springtime in a field of flowers. They could be the original “Flower Children” celebrating their love for each other in a natural setting. 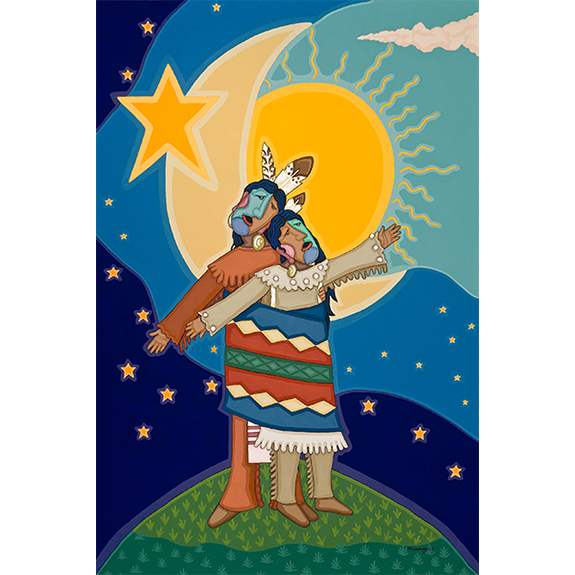 We've got the Sun and the Moon & the Stars

Using a line from an old song, Jesse adds to his sky stories with one of his own. Here a young—in love—couple stand under the sky basking in its beauty—sun, moon, and stars which Jesse placed in the sky all at the same time—and grateful regardless of what material things they are without.